We celebrate our 45 anniversary with a dinner at the House of Lords on the 18th of April 2013. Professor Stephen Furber will give a presentation of his €400m ‘SpiNNaker’ project to build a ‘silicon brain’ made up of a million ARM chips. Dick Evans, one of the last three active founders will propose the toast to the Club. 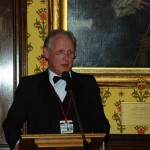 Stephen Furber is the ICL Professor of Computer Engineering at the School of Computer Science at the University of Manchester but is probably best known as one of the designers of the BBC Micro and the ARM 32-bit RISC microprocessor.
Steve’s latest project is known as SpiNNaker (Spiking Neural Network Architecture), also nicknamed the “brain box”, to be constructed at the University of Manchester. This is an attempt to build a new kind of computer that directly mimics the workings of the human brain. Spinnaker is essentially an artificial neural network realised in hardware, a massively parallel processing system eventually designed to incorporate a million ARM processors. The finished Spinnaker will model 1% of the human brain’s capability, or around 1 billion neurons. The Spinnaker project aims amongst other things to investigate:

Steve believes that “significant progress in either direction will represent a major scientific breakthrough”.
Steve chaired the Royal Society study into Computing in Schools, which resulted in the report ‘Shut down or restart?’ in January 2012. 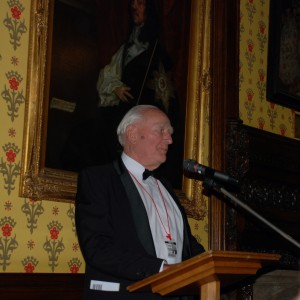 Richard Evans was one of the original founders of the Real Time Club along with Alan Marshall, Philip Hughes and Charles Ross. He started Time Sharing Ltd. in 1967, which was the first ‘Online in Real Time’ bureau of its type in Europe.

Concerned that, although serious poverty was largely a thing of the past in the UK, many people were desperately unhappy – and psychological therapy could help many of them towards a happier life. So Richard retrained as a psychotherapist, and contributed substantial funds to found a charitable trust to make psychological therapy more available in the UK.

Connect with the Real Time Club on social media:

For other enquiries please e-mail the Club Secretary.

Real Time Club dinners are open to non-members. Everyone is welcome to attend. Book now: